*from the Covington Enterprise 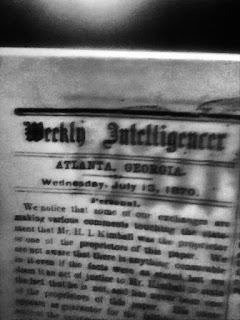 "FATAL SHOOTING -- On Sunday last, July 3, Mr. D.M. Smith, familiarly called "Doc Smith," was shot near Pitts Old Mill, about 2 miles from the town of Newborn, Newton Co., by Wm McCart. Mr. Smith had struck Mrs McCart, mother of Wm, in a difficulty about her children's absence from their work on his farm (the mother &amp; children being in his employ), a week before the shooting. William went to talk to Mr. Smith about the affair on the fatal morning, and found him in his cow pen. Mr. S said he did indeed strike Mrs. McCart &amp; asked if he took up the quarrel. Upon receiving an affirmative reply, Mr. Smith moved as if to approach Wm who then drew a revolving pistol &amp; fired the first ball, striking a cow, and the second wounding Mr. S in the arm &amp; breast, causing his death in a few hours. McCart then fled &amp; has not been arrested. The Coroner's Jury returned a verdict in accordance with these facts. -- Covington Enterprise"

Fascinating bit of history there. Though my Great-Great-Great Grandfather &amp; my Great-Great Grandfather were both named William, and both resided in Newton Co. during this time, based on my research &amp; the particulars involved, I'm not necessarily sure it was either one of them (would have to have been the younger; however, based on my info, his mother died in Abbeville, SC before they moved to Covington in 1850. Also, he didn't die until 1915, and remained in Newton Co. (Starrsville) until he went home to Glory). At this point, I think it may have been my first cousin, possibly five-times removed, also named William McCart, originating from the Gwinnett McCarts, who did end up moving away (fleeing the authorities?) to Coffee Co., AL, at around this time, based on my research. Please know, this is pure conjecture on my part. Interesting, though, no?

Regardless, the moral of the story is this:

Don't strike somebody's Mamma, lest you find yourself shot dead!

Hope you enjoyed that. More to come like this here at TPC. Most of these stories will not involve my family, but they will be heavy on crime &amp; murder.

As always, thanks for reading,